Have you ever booked a hotel room in Switzerland and were wondering why the currency abbreviation for Swiss Francs was  CHF in front of the amount? Or when driving through Switzerland why the car stickers show CH? The extension of Swiss web sites also being .ch? 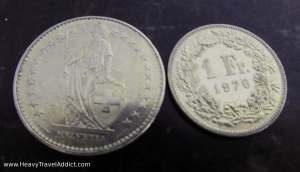 CH stands for the old latin name of Switzerland: Confoederatio Helvetica -literally translated Helvetian Confederation and going back to the first tribe settling in the region of Switzerland, the Helvetians.

Today Switzerland is called the Swiss Confederation in English, in German it would be Schweizerische Eidgenossenschaft, Confédération Suisse, Confederazione Svizzera in Italian and Confederaziun Svizzer in Rumantsch (all except English being the official four national languages).

Helvetia is still written on post stamps and on Swiss coins, some of which show the picture of “dame Helvetia” a feminine figure representing in person the Swiss confederation.

← Switzerland from A – Z: B like Bern
California’s disease →