Casablanca during Ramadan – for beginners

My bike takes me to the city center. 6km and roughly 20 minutes and no country flags anywhere along the road, no nervous car driver honking his horn at another driver , no one screaming at another person.

Last night I got home from Casablanca and this weekday morning, the streets of my hometown seem to be extremely calm and quiet compared to the busy buzzing of Casablanca. 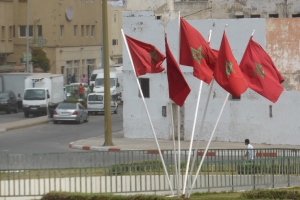 What I realized first when getting to Morocco were the flags everywhere. “The Moroccans seem to adore their country” is my first thought. They certainly do, but I am later to find out that the flags were hoisted on the occasion of the Throne Day (in Arabic: Aïd el Àrch) which takes place on July 30th.

The car honking is probably a question of survival in this city that seems to count an enormous amount cars. If you want to drive in this town you must have learned how to drive here. I was surprised that not more accidents happen. Obviously cars win over pedestrians, so expect to wait a long time should you wish to cross a street during rush hour and even if you wait at a crossing and your light turns green, better double-check before you throw yourself into the battle.

Looking at the coloured spices of a stall  in the old Medina a woman next to me starts yelling at the vendor, and she does not hold back. From “donkey” to “dog” the words in arabic are carefully chosen to make their effect and the woman does not finish her purchase and leaves the seller standing there.
At traffic lights people get out of their cars to scream at the driver in front, in the back, on the left, on the right.
A woman holding onto a little girl shouting at her while other people pull at the girl from the opposite site yelling at the woman.

I am not used to people openly screaming at each other and the fact that I don’t understand the language does not allow me to judge the situations. So at first I feel a bit lost and have the feeling that the Casablancans I cross in the street are not smiling much. Some might say that this is due to their rough life and that most do not much to smile about. However, when you go to Rio de Janeiro you meet people who do not have a higher level of wealth but still, their smiles are there. Some also blame it on the Ramadan period.  The fact that people have not eaten or have not even had a drip of water for hours and might be the reason for the nervousness, the shouting and the missing smiles. But no matter the reasons, I had to realize that as soon as you approach someone with a question, every single person was extremely helpful and I got my dose of smiles. Thank you! 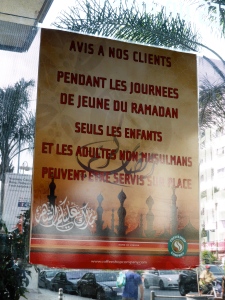 Speaking about Ramadan, I obviously was ready to not eat or drink in the streets out of respect for the Muslims observing Ramadan. But it took me by surprise that it is really hard to find an open restaurant during the day. Most restaurants and cafés along the streets were closed and you have to chase some international chain restaurants if you did not take your breakfast at your hotel before starting your day. This famous fast food places are not my favorites but for once they came in handy as we were really hungry in the middle of a no-breakfast day. The one “Mc”-restaurant that is open during Ramadan has a sign on the window explaining that eating in the streets during Ramadan is subject to the country’s law and that they can not be held responsible if anyone does not respect this law. The second restaurant’s sign (on the right) mentions that only children and non-muslim adults can be served during Ramadan.

But once the sun has set and the sign is given that the fast is to be broken, you can cross the streets wherever you want as they are empty.  Everybody has gone home or to a restaurant to eat the traditional meal, the Ftour (or Iftar), which is breaking the fast. This is some sort of breakfast which you can have in all the restaurants and hotels. Actually during the Ramadan period some restaurants do not seem to serve anything else but the traditional meal. We enjoyed several of Ftours and one evening, after a crazy taxi drive through empty streets with a hungry taxi driver, we had an extra lovely moment on the Corniche with a view on the sea. You better like it sweet and enjoy honey as this is one of the main ingredients.

This meal is accompanied by some mint tea which is so good that you feel like having it all the time when you have  the possibility. Again, you better like it sweet.

Have a walk in the streets after the Ftour and check out the difference. You can go and buy fashionable trainers at midnight, the squares and pedestrian streets are packed with families, young and old. All the terraces that were empty during the day are crowded, but although I saw plenty of women (a lot of them with their heads covered) in the streets at night, the terraces seemed to be mainly a “man’s thing” and I hardly spotted any girls in these places.

Another surprising thing you better know about is the change of time. When arriving at Casa the time was announced in the airplane: GMT -1!!! I was cursing my smartphone who would just not get the point and show me GMT.  It was supposed to be 2pm and this silly phone showed me 1pm. Until we found out that Morocco has changed its time, which is usually GMT, to GMT -1 during exactly one month, the Ramadan month. Which is extremely smart as that means the sun sets at 7:30 pm instead of 8:30 pm and which comes in pretty handy when you have a normal working day through which you have to make it without eating or drinking! But for the tourists it gets more complicated…our company has printed the GMT time on our flight tickets back home and if we were not told by a Moroccan friend to make sure to be an hour earlier that what was printed the airplane would have left without us.

There is a bit of sightseeing to do in Casablanca, but do not expect a tour bus to take you around from one site to the other. Take a bigger cab and arrange the price before or take a red “petit taxi” and make sure they turn on the counter. These are extremely cheap for our standards.  A 10 minutes ride was 15 dirham (approx. EUR 1.50) when the day of our departure to Casablanca we took a cab back home to the airport for roughly the same 10-15 minutes it was 30 times the price. So if you could afford to come here,better tip well.  Another comparison point is the minimum wage which is 2300 dirham per month and corresponds to EUR 230.

To communicate with your taxi driver in Casablanca, you better manage a few words in French or even better some Arabic although we fell on one who spoke also a perfect English. In hotels obviously staff in touch with clients speak English and they also speak French. However I was amazed to see that a lot of people, even young ones only seem to speak Arabic and only very little French.

My guide-book mentioned a few placed to see and we did see the following: Sacré-Coeur Cathedral, Hassan II Mosque, Place Mohammed V, Beaches (excerpt from the guide: However, the promenade packed with walkers and joggers is really a potholed pavement and in between the busy beach clubs, the view is spoiled by abandoned pleasure grounds and concrete swimming pools filled with construction rubbish, Ancienne Medina, Parque de la ligue Arabe and did not bother about the rest. I guess Casablanca is more about getting the feeling of the town and its people and not about its sights. I will be back one day to see this town outside the Ramadan period.

In the meantime here are a few pictures from my trip to Casablanca:

The mosque Hassan II, do not miss this in any case and take the guided tour (or you cannot get in), everything you see and learn about is worth it. Our guide was extremely good and taught us some interesting information not only about the Mosque itself but also about the Islamic  prayer rituals. 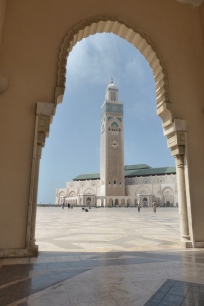 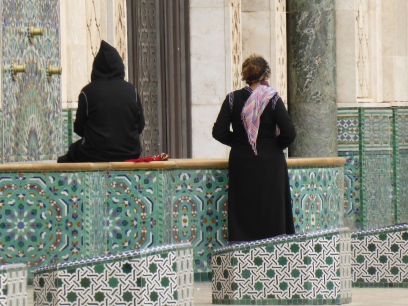 Sacré Coeur, a Catholic Church amputated from its cross and only serving for exhibitions. You can climb up the tour for 20 dirham if you are ready to face pigeon poo all the way up. But the view is worth it.

Sacré Coeur from inside

In the old Medina 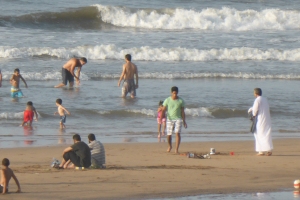 The beach, nice to stroll along in the evening on the road along the beach, the Corniche. Big crowd of people, a big choice of restaurants. The beach itself seems to be exactly as mentioned in my guide…and don’t forget this is a Muslim country and beach life is different from other countries, at least in Casablanca and during the Ramadan even more. 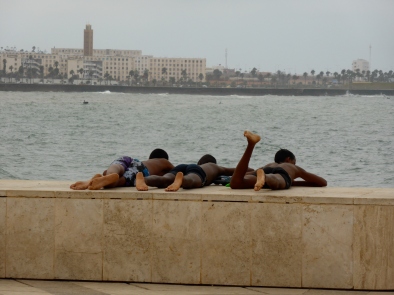 Youngster the in sea close to the Mosque Hassan II

Kids jumping into the sea close to the Mosque

Contrasts: A special pedestrian and the brand new tram in Casablanca 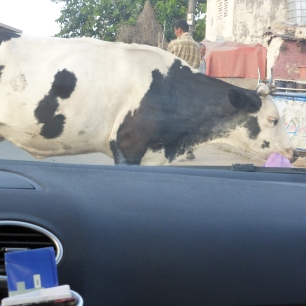 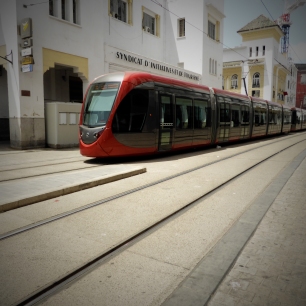 One thought on “Casablanca during Ramadan – for beginners”