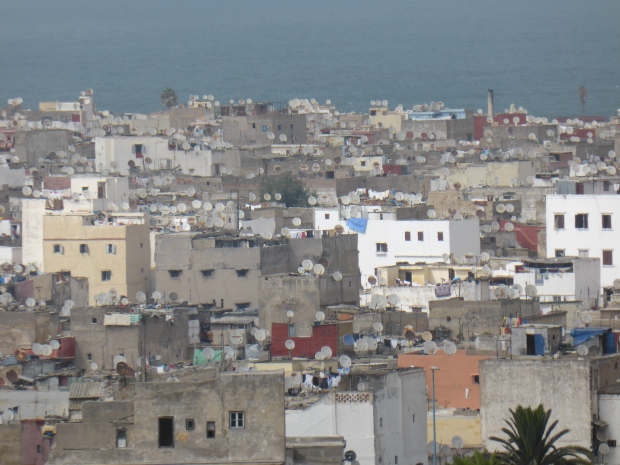 I decided to learn more about Casablanca before getting there and apart from reading the meager guide books I will also watch movies I find on the subject. Obviously the classic “Casablanca” with Humphrey Bogart and Ingrid Berman is on the list just for the fact that it plays in Casablanca. But I will watch the movie “God’s Horses” a second time as it impressed me so much how the filmmaker Nabil Ayouch treated a heave subject without judging.

It is not a movie that was a blockbuster and it was shown in an alternative movie festival. It does not show the sightseeing spots of Casablanca (of which there aren’t too many anyhow as it seems) but a different side of a town that is not promoted by tourist offices. But it is important to always be aware of that real side of a country and not just live the fairy tale of our journey without thinking any further. Traveling should  definitely make you also become aware of  people’s reality at your vacation destiny, make you grow and eventually make you help if you can.

So, the above are reasons enough to share the following with you :

What could compel two ordinary, football-loving brothers to become part of a cell of suicide bombers? That is one question – among others – that Moroccan filmmaker Nabil Ayouch dares to ask in God’s Horses, a thoughtful, masterfully controlled adaptation of Mahi Binebine’s novel The Stars Of Sidi Moumen. Inspired by the real-life 2003 terrorist attacks in Casablanca, Ayouch’s film follows two brothers over the course of a decade.

Powerfully narrated and convincingly acted without talking down to any of its characters, God’s Horses takes the viewer inside an immense Moroccan slum and describes the no-future lives of its inhabitants; very gradually it gets around to showing how fundamentalist recruiters entrenched themselves there after 9/11 and used it as a hunting ground for terrorists and suicide bombers.

While the two brothers begin as kids in search of thrills in the sprawling slums of Morocco’s Sidi Moumen, we witness their gradual, and ultimately shocking, radicalisation.

There is a kind of brutal poetry in Ayouch’s depiction of the harsh childhood of Yachine (Abdelhakim Rachid) and his inseparable pal Nabil (Hamza Souidek), under the protective fists of Yachine’s older 13-year-old brother Hamid. Soccer games turn into life-threatening fights, weddings into drunken revels, and the string of insults and obscenities hurled at them by parents and grown-ups serves to toughen them up for the hopeless disenfranchisement of adulthood. Growing up, the violent Hamid (Abdelilah Rachid) is thrown into prison for two years; when he gets out, he’s changed into a glassy-eyed fundamentalist, whose mild manners are more preoccupying than his previous violence.

A major achievement by one of North Africa’s most important filmmakers.

← Help, we are going on holiday…
Perfect timing – Ramadan (رَمَضَان) →